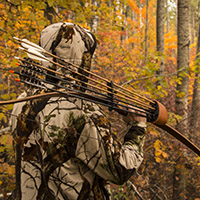 gjs4 wrote:I use a hen in open areas or when I think there needs to be visual enticement. I love ones that move...like an Avian w a slight wind. Last years tom stayed back, she moved, I purred....he ran and has since been reseen on the grill.

Although I have a great jake...I never use it. Have seen a couple birds run into them...nd have seen a few run away. Yu really need to know how dominant the bird youre hunting it.

bestturkeydecoy.com I think is the place to go for the Dakotas which when painted are basically the same as DSDs but on sale for $50 right now. Youre welcome :)

I had the best turkey decoy Jake and let me tell you first hand.. They are not the same as DSD. The company from what I had read stole the body/head pose from DSD. Now, I saw the price tag of the DSD and thought they looked the same. I saw pictures of the net that looked the same. When I got the best turkey decoy Jake my first impression was that yes the posture is very similar but the colouring sucks compared to DSD. The decoy is basically a brown colour compared to shiny black of the DSD. The paint started to chip after 1 hunt. I didn't own the best turkey decoy for more than a week before selling it. I'm not ripping the decoy but I will comment from owning both that they are not the same. I also found customer service much better with DSD. At the end of the day, I still cringe at the money I dished out for a Jake, upright hen and breeding hen from DSD so this is just my 2 cents. Will I ever hunt over a decoy besides DSD?? No!

I can't speak for the DSD as i haven't seen one up close. If you look a couple posts back, I ordered a BTD on Wednesday night with free shipping for $50. It arrived Friday in the mail - that's like Amazon Prime level shipping service. The beard sucked. It was a few strings of rubber. I clipped the beard off and epoxied on the beard from my jake and let the epoxy cure overnight. I tossed it in the back of my vest at 4am the next morning. By 7am, a heavily hunted public tom was digging his spurrs repeatedly into the decoy. Is it as good as a DSD? I'll probably never find out because that experience leads me to believe it's good enough. I still have plenty of that $0.50 bottle of black gloss paint if i want to darken up the color pattern a bit. I can understand if people choose the DSD to buy American manufacturing, though.